AccessArt is pleased to share a few examples of artists sketchbooks. Here artist Debbie Greenaway shares her sketchbook and gives some advice for those keeping their own. 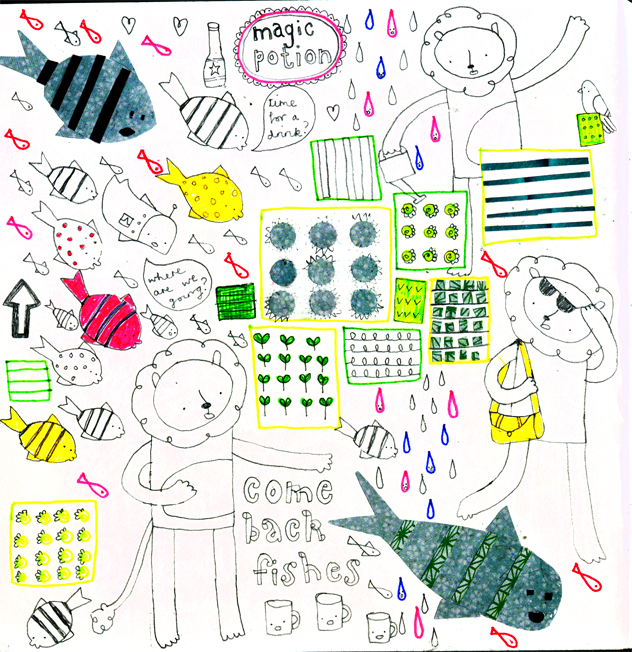 I am an illustrator and printmaker who lives and works in Manchester. I graduated from University of Central Lancashire in July 2008 where I did an illustration degree. When I handed in all my work for the final assessment, I found it odd to think about taking a break from drawing and just continued to draw in an old sketchbook that I had been hoarding.

So after the big hand-in day, I was really stuck about what to draw as before I was drawing to set university briefs/projects. So now it was time to draw just for me. Well I was stuck. I decided that I should really start improving my people drawing skills as I have always avoided and hated drawing people. In the end I went out and about to do some reportage/observational drawing as I thought it would help but the thought of drawing people still scared me. While I was sat in a cafe deciding what to do, I decided to draw people I saw in the cafe as lions. I used draw lions all the time when I was younger. Ten months on, I can’t stop drawing people I see as lions.

My little square sketchbook goes everywhere with me. So does a mechanical pencil as I don’t have to sharpen it and a packet of felt-tips for instant colouring-in. I try and draw at least a page a day if not two. If I am unable to go outside to do observational drawing I use any opportunity in order to create and draw lions. I sit at home and draw things I see on the telly or in magazines as lions and other random objects for example, slices of bread or muffins from work to fill in spaces in between the spaces in my sketchbook. Sometimes I draw about things I have done or where I would like to go, what I am thinking about or just use my imagination to create other characters. I try not to eavesdrop but over heard snippets of conversation are often scribbled into speech bubbles to give the lions something to talk about.

I am hoping to write a story about some of the lions and characters I have drawn. Some of the lions feed into ideas for my print work (screen-prints and etching) and I am developing some of these ideas in to creating pieces of work for my portfolio.

For your sketchbook approach:

With a sketchbook it is important not to scare yourself with the white pages. You can keep it as messy and as neat and tidy as you like. You are free to draw in it, drawing as you want to draw with what every materials or methods you choose. When I speak to people about drawing they often say they cannot draw but I believe everyone can draw. People feel or are expected to draw and create an amazing masterpiece straight off, all perfect and realistic looking but drawing and enjoying drawing is nothing like this. If you want to draw ‘silly’ or have a particular way of drawing say for example with continuous lines or making collages then you can do this. If your three legged pink with green spots monster has eleven eyes and lives in a snooker table then so be it. there are no rules at all. it is your sketchbook and you can draw what you want as you want to.

See more of Debbies work at her website and blog