In this post, Natalie Bailey shares the submission by St Peter’s Church of England Junior School for Inspire: A Celebration of Children’s Art in Response to Jacopo del Sellaio’s Cupid and Psyche by Year Five pupils who call themselves the ‘Fitzy Peters‘.

Natalie shares the pupils’ Inspire journey and their response to the Renaissance painting of Cupid and Psyche by Jacopo Del Sellaio at the Fitzwilliam Museum, Cambridge as well as her reflections on the transformative impact that the project had on the children and how Art can support healing and wellbeing.

After attending the CPD day for Inspire 2020 in March, I decided to present the painting of Cupid and Psyche to my whole Year 5 class. We retold the story and developed different themes using the painting as a focus, but it was a group of children, the Fitzy Peters, who made a deeper connection with the story.

Inspired by Psyche’s urge to prove her love for Cupid (his jealous mother Venus sent her off on a dangerous quest) and being impressed by her resilience, they made significant connections to the story, especially where grief and loss were concerned. I am uncertain who decided on this, but the children wanted to make a dress. Someone said ‘Would a dress be Art?’

The children knew I could make dresses, so that was a good start!

‘Clothes tell a lot about where your head is. Psyche was a nice girl who had to get tough’.

The children decided to tell the story of Psyche’s resilience through a dress designed especially for her, at my studio in Wisbech (Studio 15). They wanted to paint, sew (especially on a sewing machine), sing to the radio, put the world to rights over orange squash and biscuits, make and create, sketch, design, tell jokes and bust a few moves to their favourite songs. 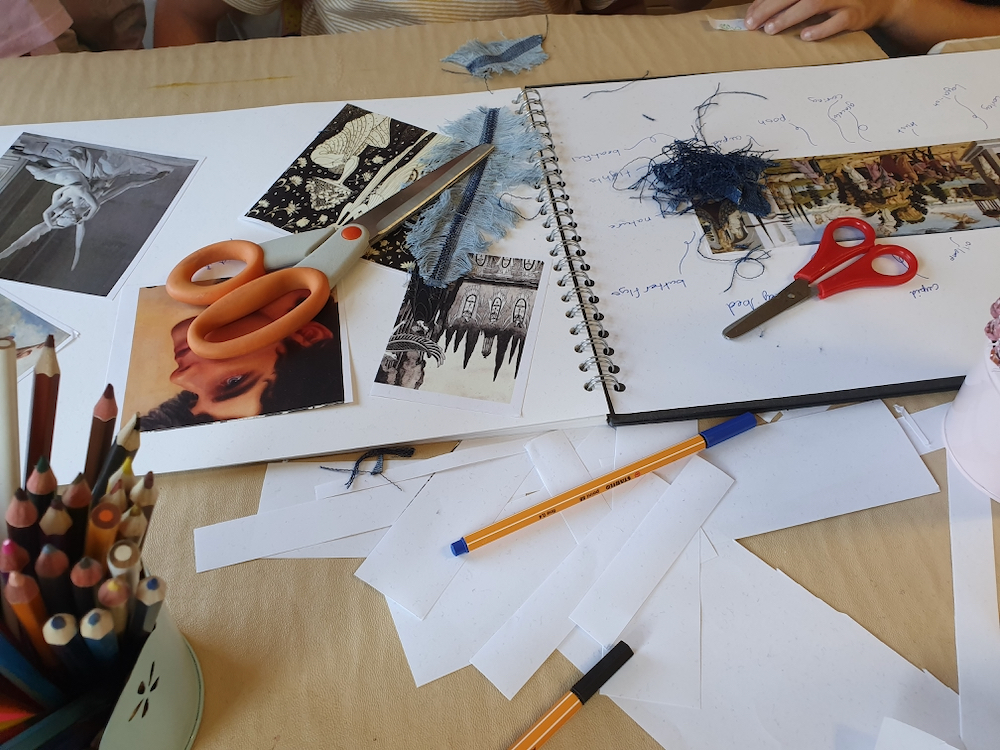 Our next problem was resources and the fact that we had absolutely no budget. Using recycled fabric was discussed within the group and if our dress was going to represent resilience, what would represent this? 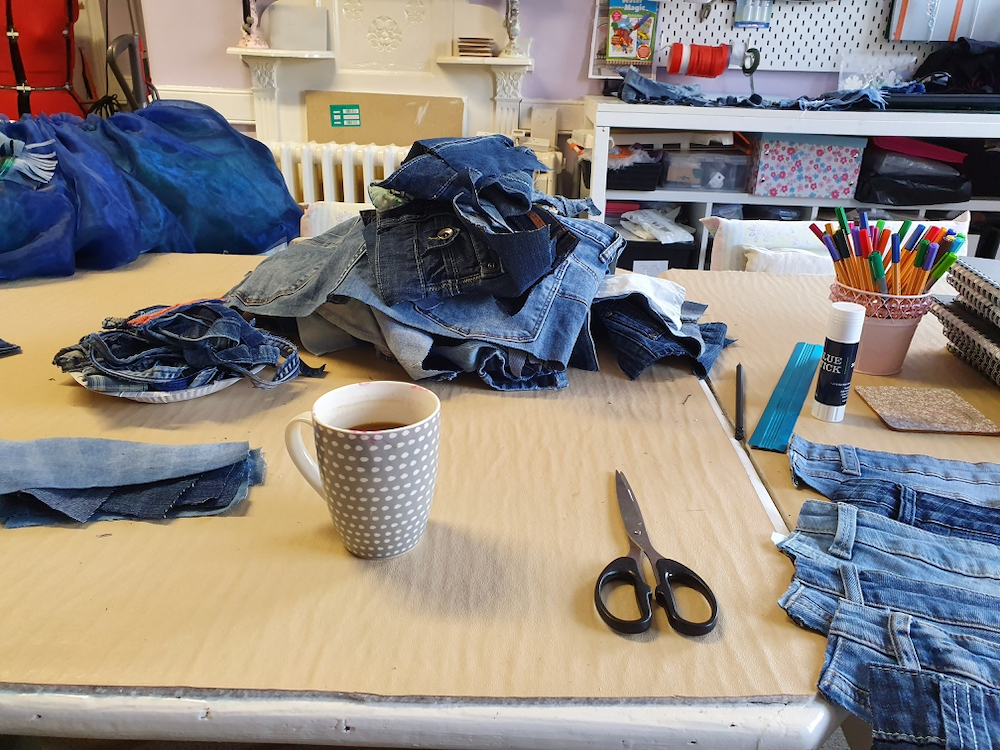 Tomasz said his mum had jeans she wanted to throw away and we agreed that jeans were very resilient. They could take the harshness of life, get worn out, patched up, become a little frayed around the edges and still survive. A bit like life really! And so our summer holiday project was born.

‘We chose denim fabric to show resilience because your jeans go through a lot. We distressed and deconstructed denim making feathers and tassels.’ 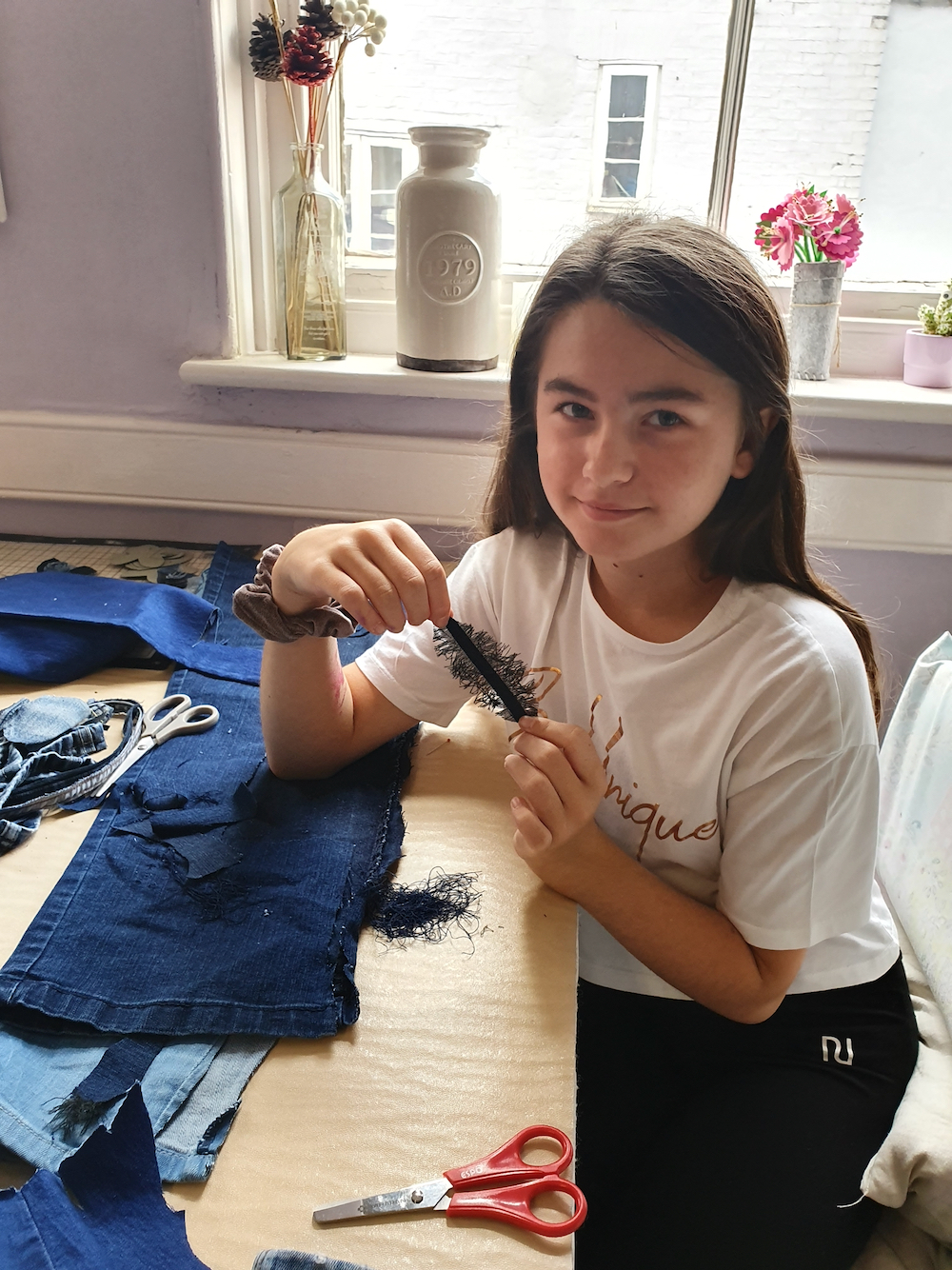 Whatever you do to this fabric, it still looks good. Our parents gave us their old jeans they didn’t want anymore. Psyche also felt unwanted.’ 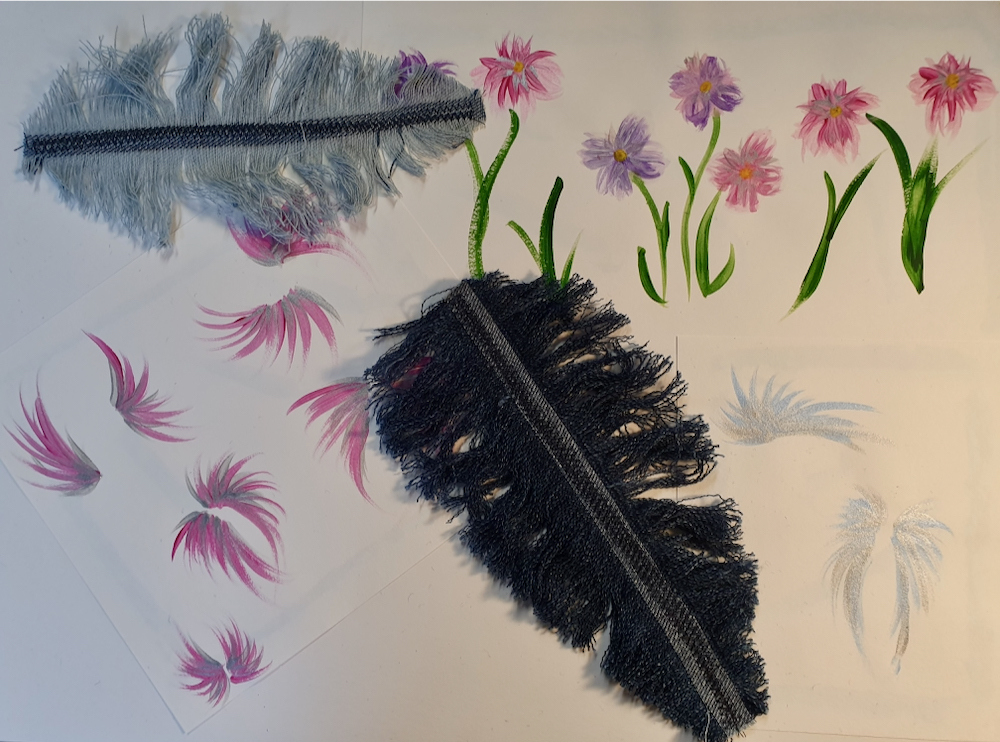 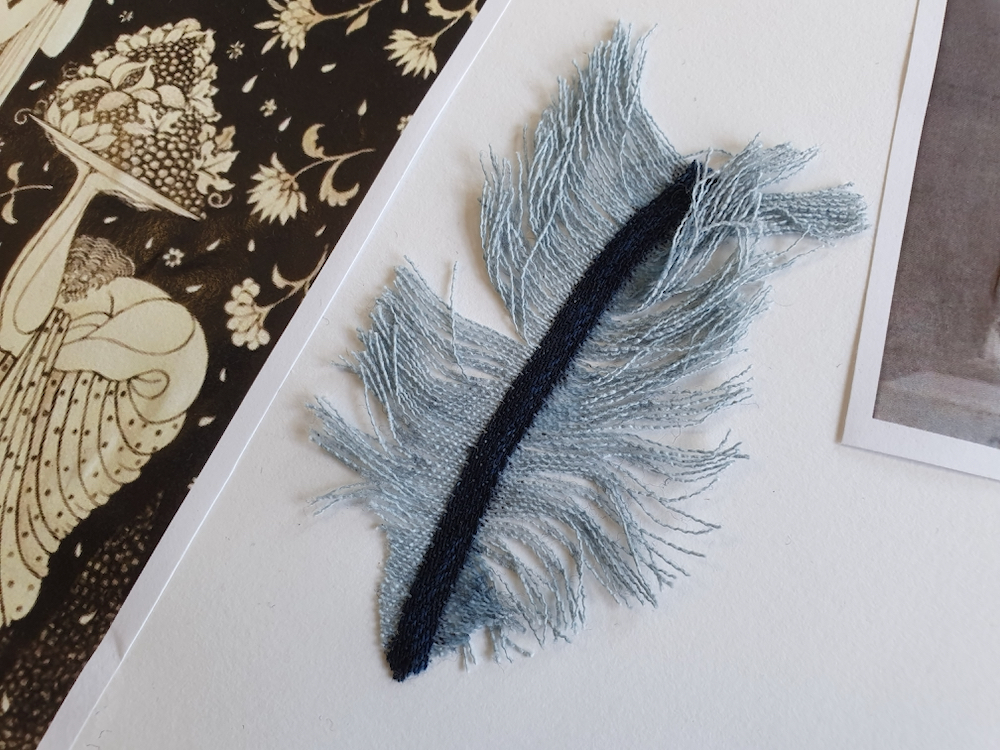 After one session, we compared ideas for Psyche’s dress. We chose Harry’s bodice design because it looked like a corset and we liked that idea. Harry thought his idea was rubbish because he could not see himself as an artist. Now his confidence has grown immensely. 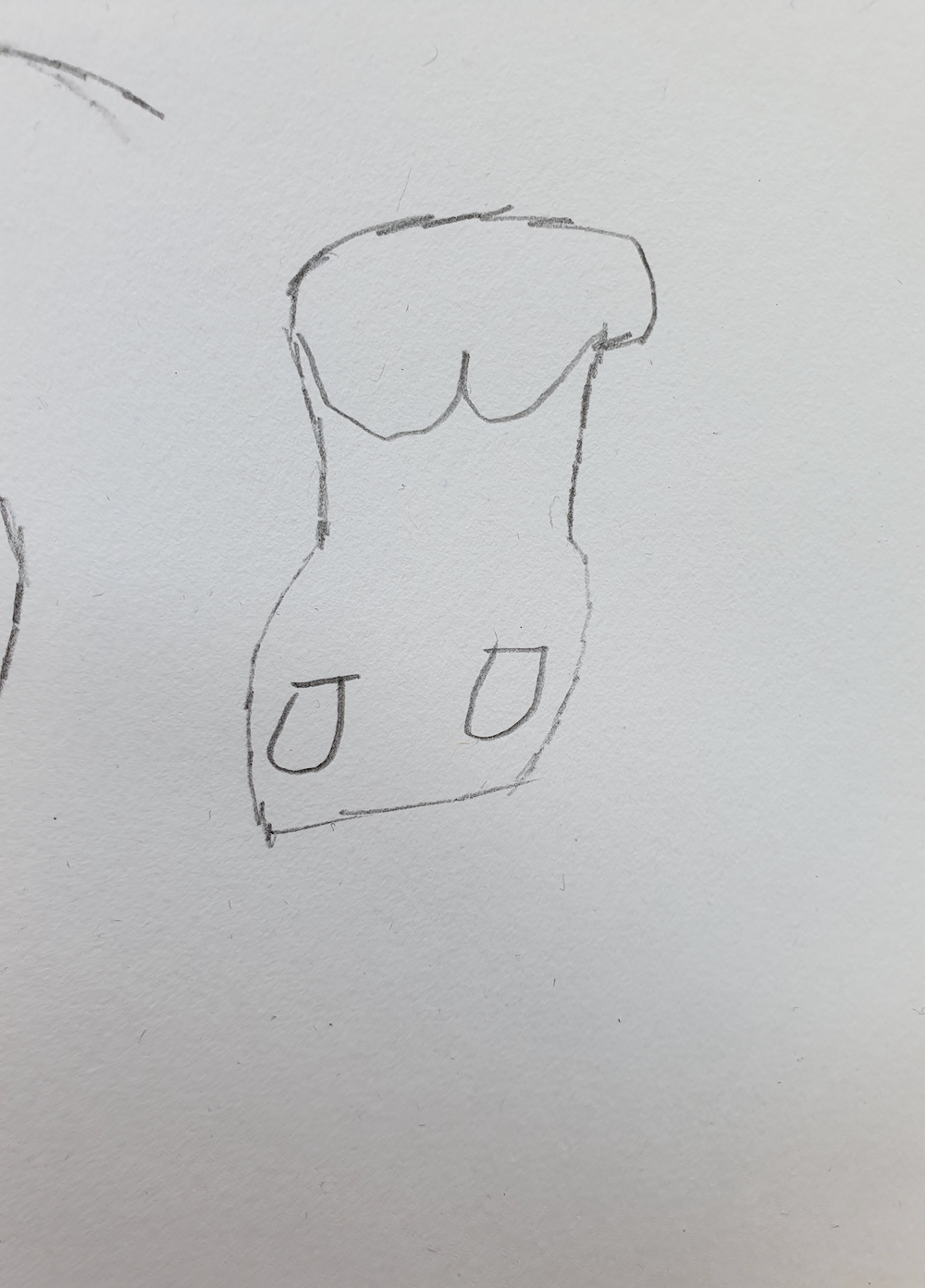 ‘I didn’t think I was good at Art. My designs were rubbish I thought. One of my ideas became the front of the dress!’

‘I can’t believe I got to use a sewing machine…. How great is that? We made flowers, arrows, and feathers.’ 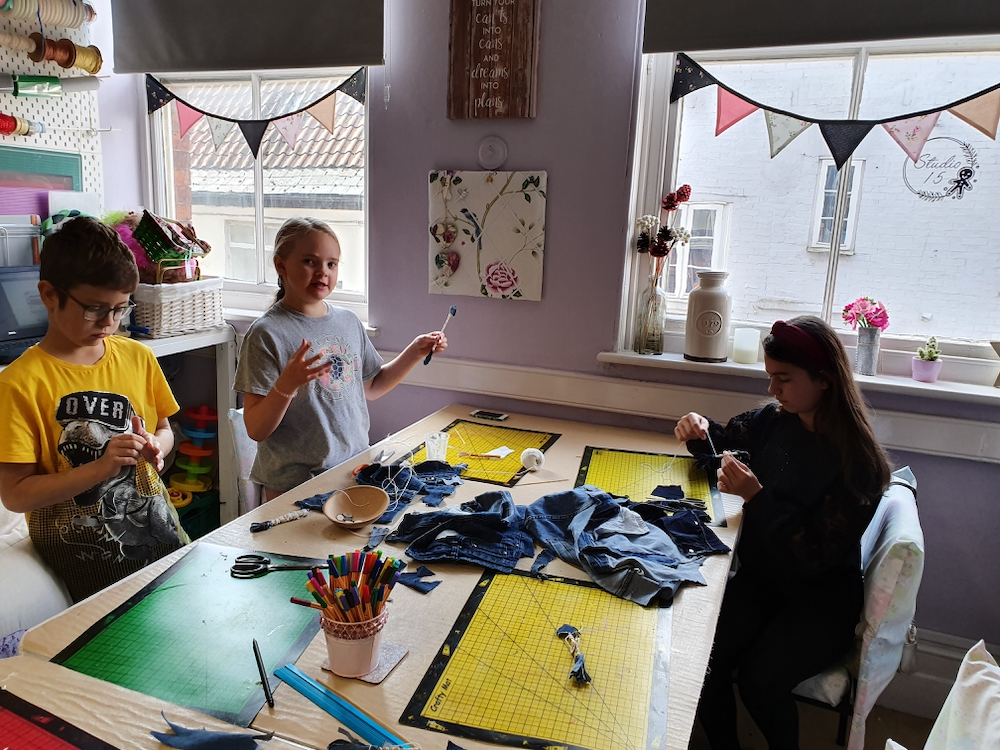 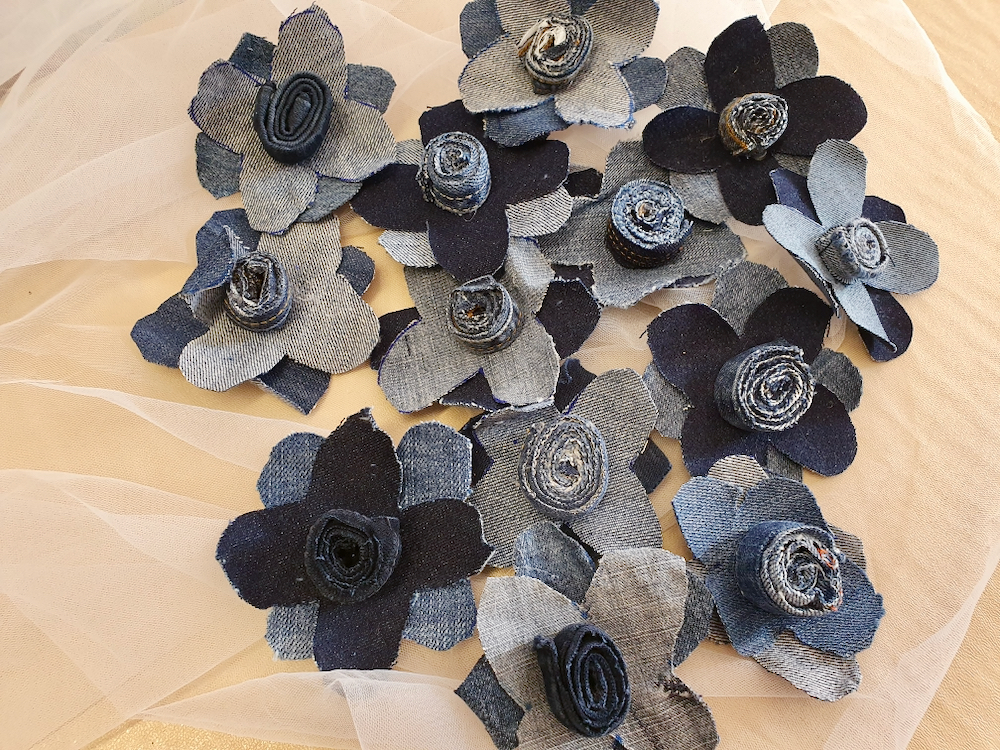 We used blue and green organza for the skirt, representing the sky and trees from the painting. Psyche’s home was important to her. The underneath of the dress is soft, white tulle showing Psyche’s soft innocent side. A stark contrast to the tough denim armour of her dress. Love hearts and arrows depict Cupid and his love for Psyche, the arrows sign-posting where to go (and as a back-up in case she needed to use them). 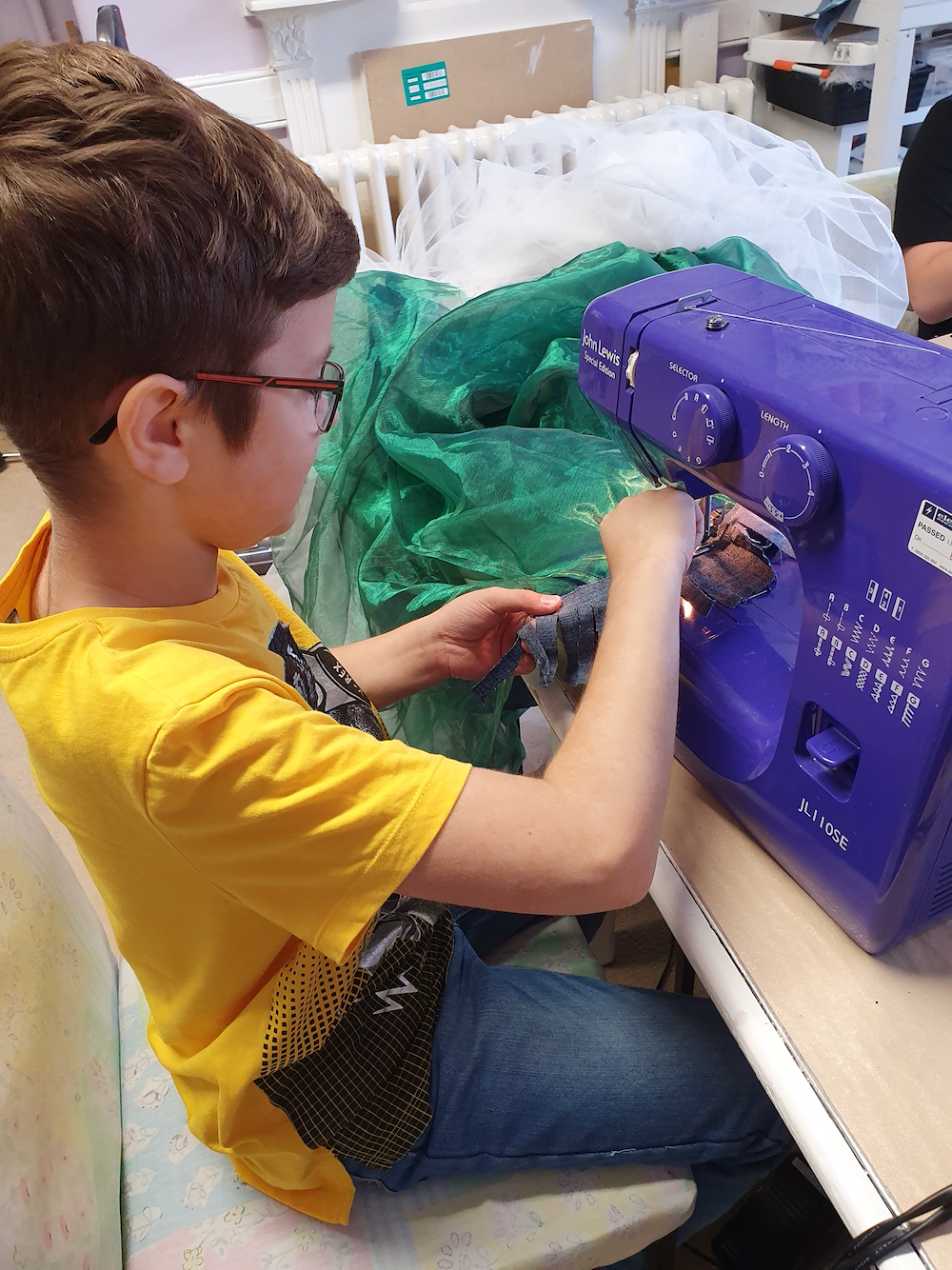 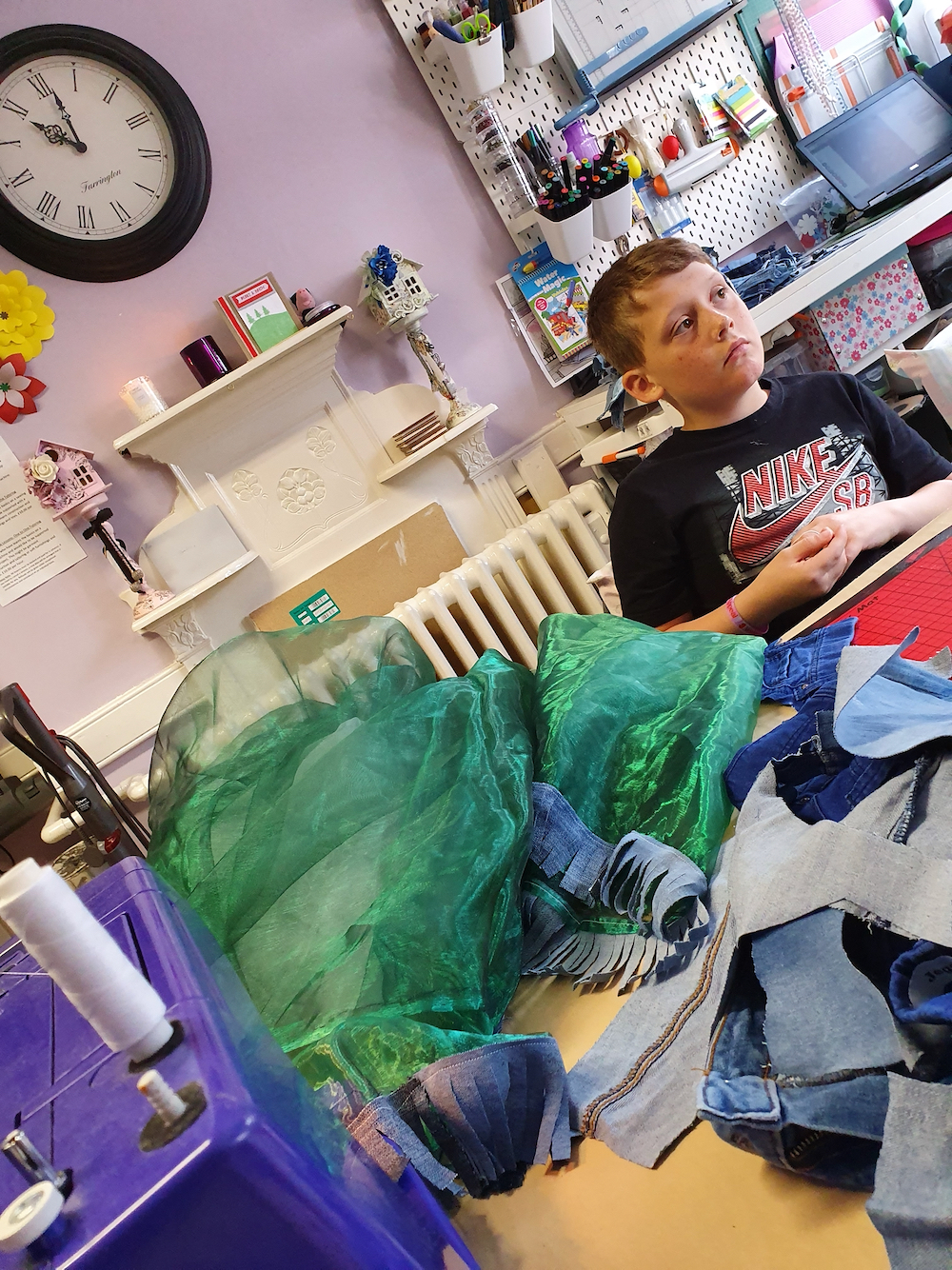 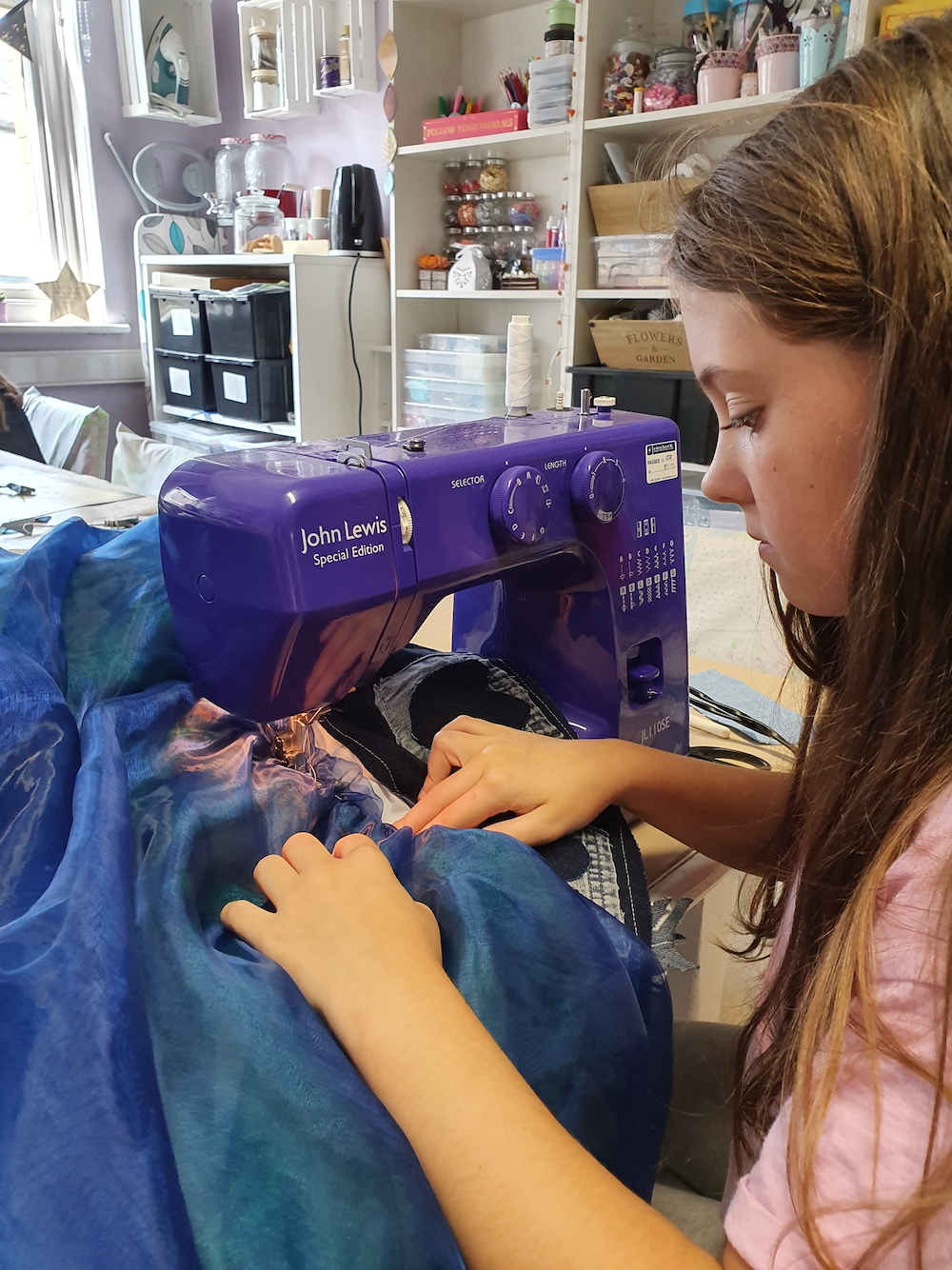 ‘Use the pockets of the jeans to put Cupid’s love letters in. He was really with her when she went on her quest. He said nice things to her and put them in her pockets.’ 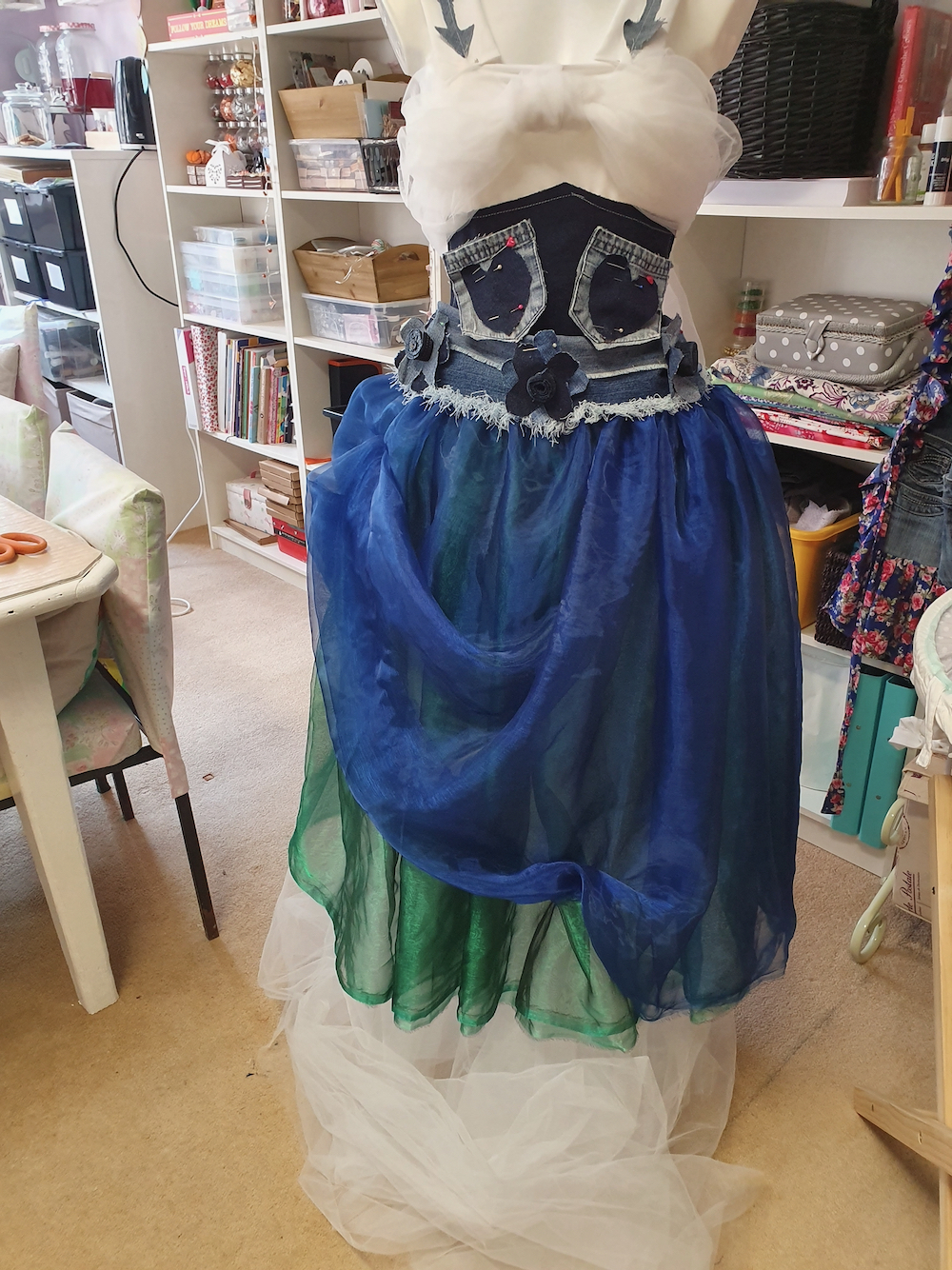 The graffiti panels on the side of the dress represent Psyche’s age, a teenager (I had her as being older). The wonderful train with the pockets each have a love letter from Cupid (written by the children from my Year 5 Class). As Psyche endured her tough journey, she did not realise Cupid was there with her. 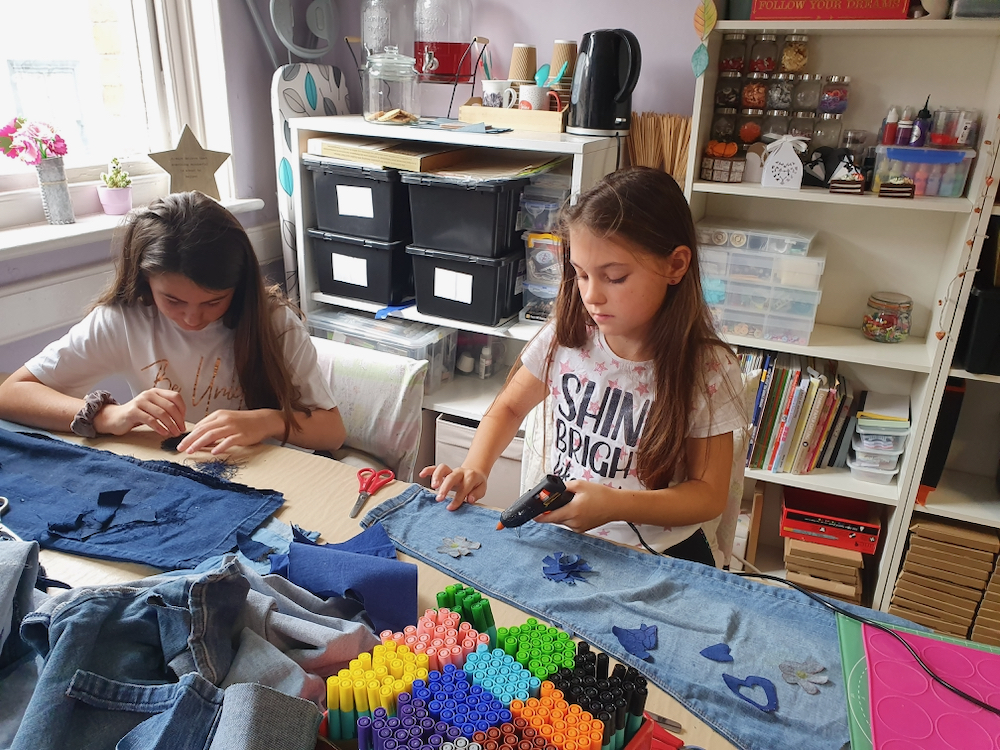 ‘Buttons hold things together. Life is like that. Sometimes you’ve got to patch stuff up like when your head goes crazy!’

As the children’s ideas began to develop, I sat back, listened to the natural flow of conversations and made notes. It all became very therapeutic. The children discussed topics which adults would have found tricky to initiate. These included topics about death and mental health; issues that had affected the group at some point. (One child had lost his father a few months prior to the project and a young member of staff from a visiting team to our school, had been killed in a terrible accident). I soon began to realise that I was experiencing an insight into a new world, one where children feel safe enough to share thoughts, feelings and emotions in an open, honest and carefree environment.

There was no judgment here. No one worried about saying the wrong thing. It was easy to talk whilst creative hands were kept busy, directing the gaze away to focus on the task in hand. Over our studio sessions, I became a witness to the deep and meaningful conversations about romantic love and deep moral understandings that I do not think adults give children credit for. They really understand relationships, probably better than we do. 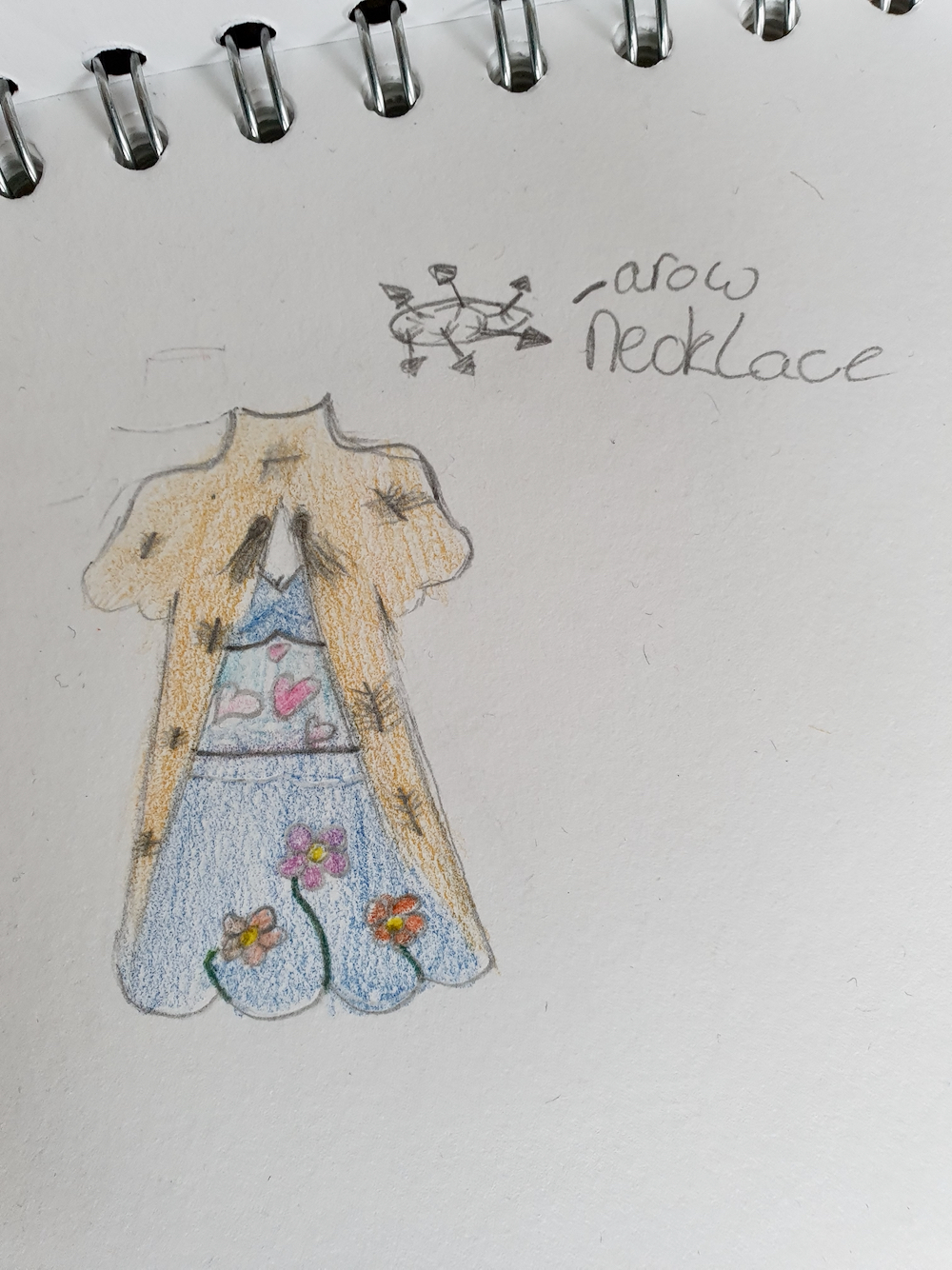 ‘I knew my parents didn’t love each other before they did. There was a change…… They thought they would keep it secret in case it hurt us… but we already knew. We hear, see and feel everything.’

‘We did a lot of talking. The part where Psyche dies got us talking about death. I questioned the silly things adults say when someone in your family dies…….They say ‘They’ve gone to a better place’. I wish adults would stop saying that. I mean if that was the better place, we might as well all die…….Tell us instead, he was a nice chap….what a great life he had!’

What surprised me the most was how Art helps children to communicate and express thoughts, feelings and emotions. Ask a child how they feel and you will hear sad, angry and upset. Give them a paintbrush and they will feel the emotion through the brush and the paint, the whole physical process constructing thoughts into articulation. Art is very powerful and has always been a means of communication for thousands of years. Children need art to express deep-rooted emotions through dance, music, drama, sculpture, mark-making materials and colour. Remove this from the curriculum and children will express emotions through other means, often anger and destruction. Art is not just decoration, it can also tell stories, gives a voice, is a message and can hide secrets and special codes. It is the most powerful tool of communication for humans and has its place as a core subject as part of the National Curriculum. 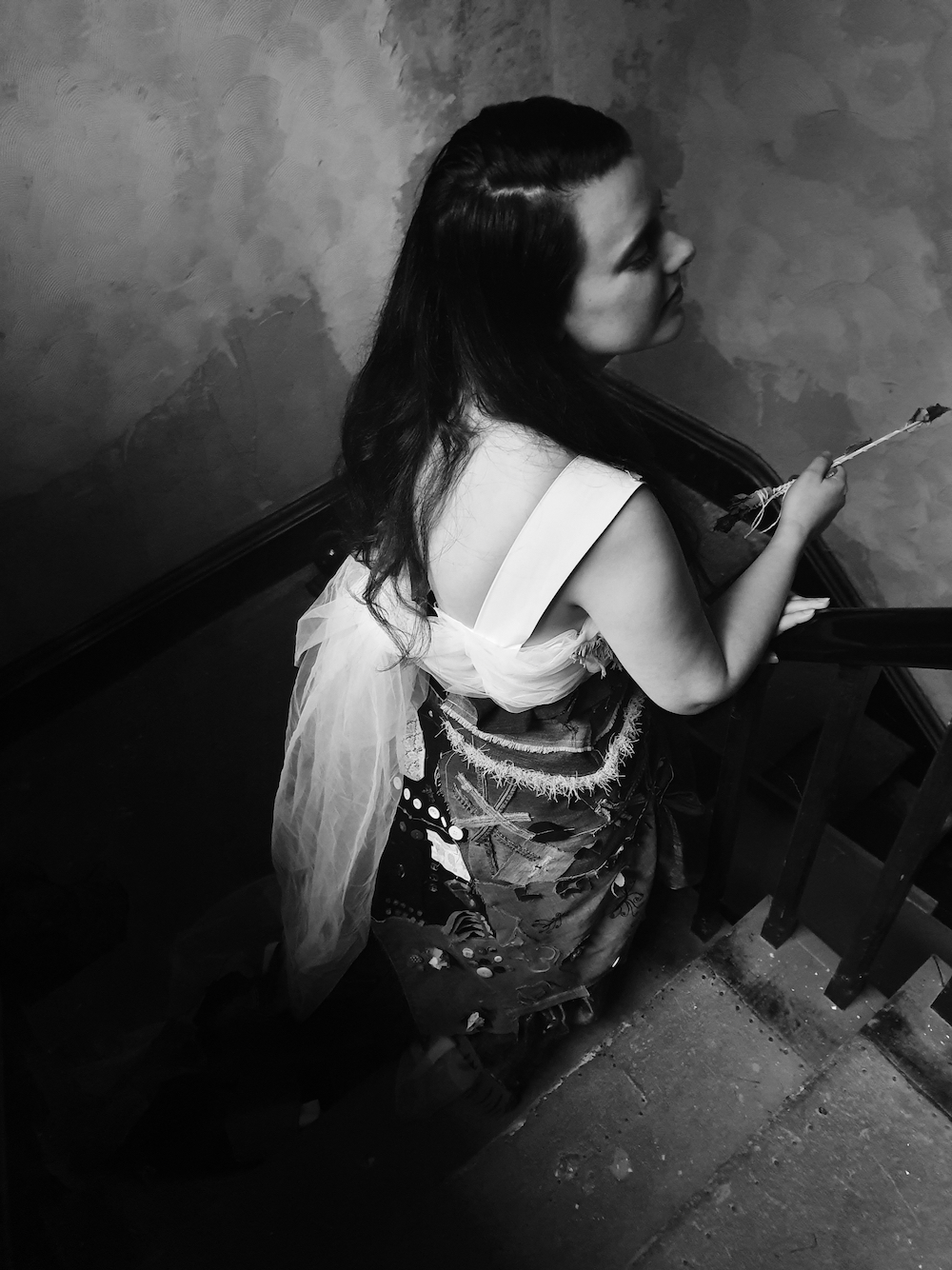 ‘Every single part of the dress has a message, a reason for being there.’

‘Our art is interactive, it can be worn. When you wear the dress you become Psyche with her armour on. Our model said the dress was heavy. The train felt as if it was holding her back. That’s how Psyche felt on her quest. She nearly died.’

Go back to Inspire: A Celebration of Children’s Art in Response to Jacopo del Sellaio’s Cupid and Psyche

Inspire – December 2019 to March 2020, was an exhibition of art made by primary school children and celebrated creativity in Cambridgeshire schools. It championed the on-going importance of cultural learning and the visual arts for all children and young people.

This post was contributed by Natalie Bailey with special permission from St Peter’s Church of England Junior School, Cambridgeshire edited for AccessArt by Sheila Ceccarelli.