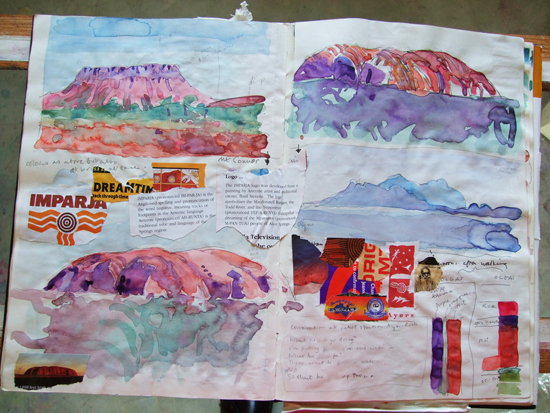 “When I was at Art College in the ’60s we had to keep sketchbooks . We were even taught how to make our own. Every Friday we had to hand in our sketchbooks so that our graphics tutor could see our work in them. They were our personal response to the observed world; we worked in them outside our college hours and they indicated a sense of our individual direction.

One day a fellow student, who had had rather a heavy week of pub evenings, handed in his empty sketchbook. He said, “I’m sorry, Mr S., I haven’t seen anything interesting this week.”

When a bomb goes off, people say there is a tangible shift in the air which signals the coming explosion. We all felt it then. Mr S. was a Yorkshireman not bereft of a neat turn of phrase. In the mighty verbal explosion that followed he railed against the mind that cannot find interest in the world, or doesn’t see because it is too lazy or uninterested to bother looking. He reminded us that as artists our duty and privilege was to observe the world, to reflect and respond and to communicate what we saw. There was no place for us in the college if we could not find interest in every moment of our waking lives.

It was this lambasting that made me realise how lucky I was to learn to draw – and to become an artist of sorts. Sketchbooks became a habit. Through drawing I gained an understanding and insight into the world which ensured I would never, ever, be bored. I realised that people who say they are bored are blaming the world for being uninteresting, when they should really be examining themselves for their negativity.

When I worked in industry and was unable to draw as part of my everyday work, I drew sleeping passengers on commuter trains, or British Rail door-handles. I wrote down snatches of conversations or announcements, glued in tickets and labels and stamps and handwriting from envelopes. When in the bath I drew the taps; when in a café I drew cups or spoons or the shapes in my coffee. There is much joy to be found in the ordinary. Now I am a studio artist again I continue to use my current sketchbook to record the world around me. Via my old sketchbooks I have an archive of memories and images to refer to and to use in new work.

I chose sketchbook pages from a 1996 family trip in a camper van, travelling from Darwin to Sydney through the red heart of Australia, and three more recent pages.

When we started on the long road south from Darwin I couldn’t believe the intensity of the colours after England. Bright lime greens, eucalyptus greeny-greys, reds, rusty browns and bright orange. Huge, intense, aching blue skies. Purple shadows, raspberry and blood- coloured rocks. We had a long way to go and there wasn’t time to stop to draw. So when I wasn’t driving I learned to sketch the landscape fast, make colour notes as we went along and paint them up in the evenings using watercolour. I found that there was such a thing as “colour memory” and that mine wasn’t bad.

I saw that the proportion of colours was important; those huge blue expanses of sky balanced the vibrancy of the colours of rocks and vegetation. The endless miles of roadside with eucalyptus and dirt and near or distant rocks weren’t at all dreary or unchanging and the more I studied those colours and shapes, the more I saw how different they were. It was a life lesson of which my graphics tutor would have approved.

I collected tourist brochures, realising that the colours of the landscape were reflected strongly in the designer’s choice of colour. I made landscape collages with them since all the colours I needed were there in the photographs. I still do this. Here are two more recent collages of Port Isaac, Cornwall, from just last year.”