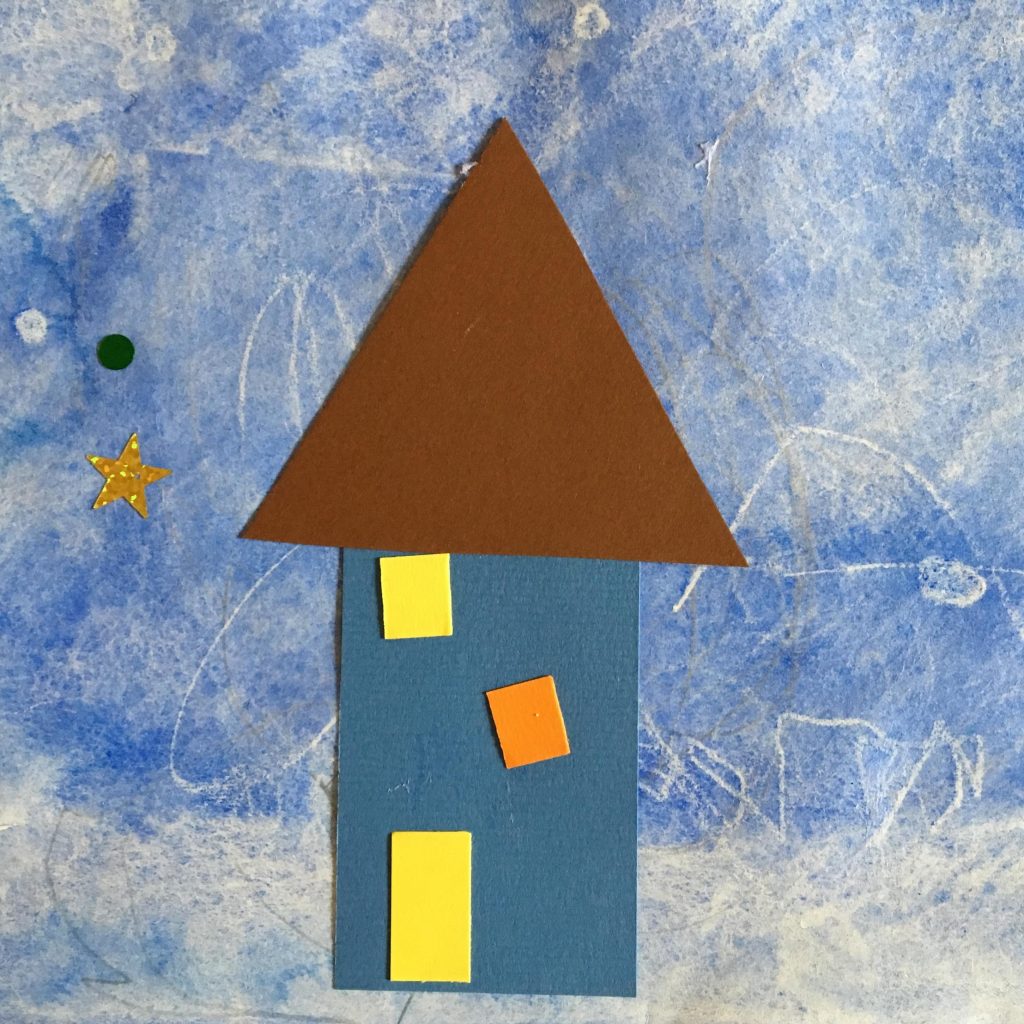 Wanting to celebrate The AccessArt Village, which had recently been seen in the Ruskin Gallery, Cambridge, I visited the neighbouring nursery school at St Matthew’s Primary and Nursery School, to work with children aged 3 and 4, to create paintings inspired by batik houses in the AccessArt Village and a night time Christmas card which had been created for the event.

I introduced the technique of wax resist to the children and how watercolour paint can be used to create a ‘wash’. Both these techniques are interesting particularly for their transforming effects and the element of magic created by seeing the white marks and shapes appearing on the paper as the blue wash is painted over.

Further to the materials themselves, another way this activity presented a good challenge for the children was that it was an extended craft, to be completed in two separate sessions – with the night sky painting being part one, and the paper collage houses being part two. With the nursery having children attending on different combinations of days, I arranged to complete the project over four morning sessions.

The materials we used for the Night Time Collages were:

The paper size we chose was A4, but this craft would be particularly effective on larger A3 or even A2 paper. There is also scope for a group of children working together to create a large scale picture together.

The activity was structured so that small groups of 5 or 6 children participated at a time. This worked well for this pre school age group, but fuller class participation would be possible with older children needing less supervision.

Before the activity began, I did a short demonstration of the materials, introducing the concept of wax resist, showing how, when we make a mark with the wax and paint a blue ‘wash’ over the top, the marks magically appear. With the theme also being the night sky, we discussed what things we might see in the sky at night. The children were able to respond with ‘stars’, ‘moon’, ‘owl’ and (when prompted about our skies in winter time), ‘snow flakes’.

The first group of children then sat down and began using the white wax to create their snow drops, snowflakes, stars, moons etc on the paper. Most of the group needed some assistance with applying the pressure needed to create enough of a mark to resist the paint and some needed a little more encouragement to render the marks as snow/stars rather than lines and dots, circles etc. The emphasis was very much on the process and the materials however, and I was keen to only gently encourage rather than make the activity too didactic.

Once the group had finished the wax resist section, they were given a pot of watered-down gouache paint and paint brushes, and they really enjoyed covering their paper with the deep blue and seeing their wax marks appearing on the paper.

The paintings were then left to dry and the following week it was time for stage two of the project.

We began this activity by re-capping what the children had done so far with the wax and water colour wash. We discussed the next stage and what materials we would be using.

I explained that the cardboard windows and doors were yellow and orange to indicate there were lights on inside the houses that would illuminate through the night time sky. I then assembled a house shape using the pre-cut cardboard so the children had something to work from.

Pre-cut cardboard wouldn’t be necessary if doing this activity with older children but I found the children responded particularly well to seeing a clear series of steps to complete so as to produce something recognisable. With flexibility encouraged as to what details they wanted to add, it felt like the right balance between structure and artistic expression!

A good extension of this project would be to introduce what types of houses we see, both where we live, and around the world. This would introduce children to a broader range of architecture that reflects our world’s cultural and religious diversity.

After demonstrating the collage section, the children then got going choosing the pieces of card they would need to make their own collage house. I explained that each house, roof, door, window etc was a slightly different shape and they could choose what size house they would like and how many windows they wanted it to have.

It was interesting to see the variation in terms of attention span applied to the task, with some children being perfectly happy to stick their house together and move on to something else, and others spending nearly 20 minutes carefully sticking windows all over their houses! It was great to discuss their thinking and ideas as they worked and to see the two stages of the activity coming together to create a lovely scene.

Overall, the children at St Matthew’s nursery responded really well to this project, and it was a great opportunity for them to create something that was over an extended period of time. We hope to visit the nursery again in the near future to work on another project that inspires their creative imagination and artistic skill!

Many thanks to pupils and staff at St Matthew’s Nursery for hosting sharing with AccessArt.