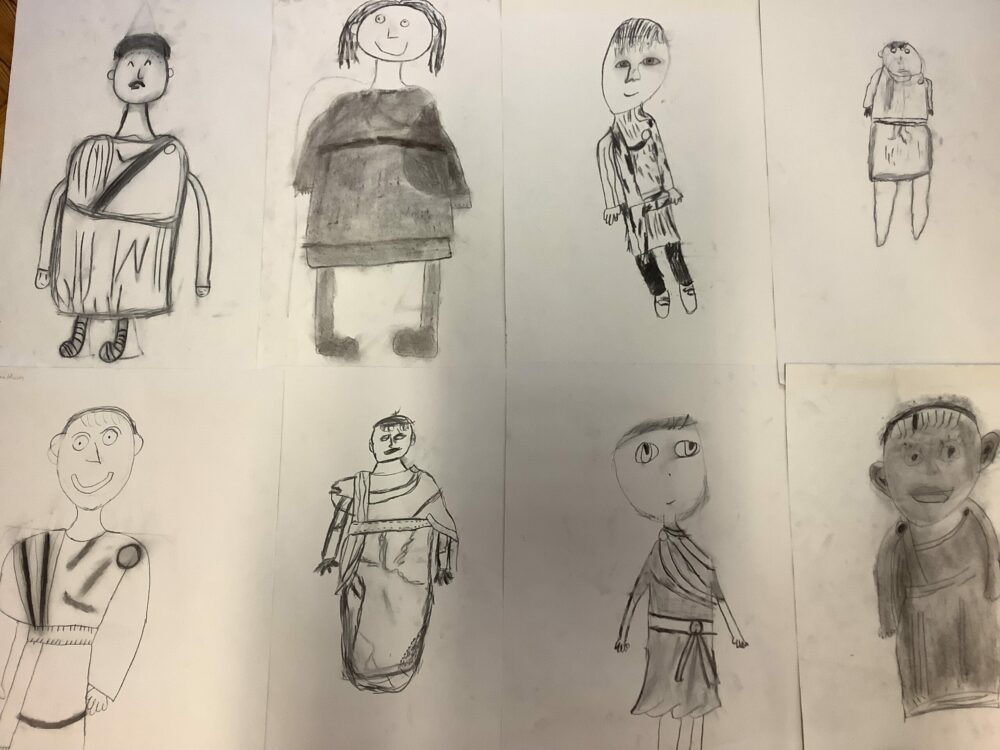 This series of six sessions explores Shakespeare’s A Midsummer Night’s Dream through art and is aimed at upper KS2 children (Years 5 and 6) although could be delivered to younger age groups with some simplification in terms of the use of text. The aim of the series is to introduce children to the work of Shakespeare in a fun and creative way.

In this first of six resources on Shakespeare’s A Midsummer Night’s Dream, we look at the opening scenes where we meet the Athenian court. Using Ancient Greek dress as a starting point, the children will begin by making observational drawings of fabric before moving on to drawing a more finished portrait of one of the characters.

The aim of this session is to introduce the children to the play, and develop skills in drawing fabric both on and off the figure. We recommend leaving the finer details and approach open for the children to interpret.

Session One: Exploring Portraits with Ancient Greek Style Dress
Warm up: 15 minutes
Main Activity: 45 Minutes
Materials needed: A2 or A3 cartridge or sugar paper, newsprint, sketchbook, drawing pencils, coloured pastels, erasers, fabric or sheets. (If possible, ask the class in advance to bring in some fabric or sheets from home).
Focus Theme: Discord and Order, Status

Time to Warm up! Observational drawing of fabric folds

Before you begin the observational element of this warm up – it’s a good idea just to spend a few minutes familiarising the children with charcoal and how to use it. Invite them to play around on some paper – making lines, smudging, dotting, spiralling, blending with dry brushes etc. It’s a good way to lead into some more careful observational work.

Next, drape a selection of fabrics over some books or other objects on a table. You could even hang some from a hook or other high position.

Take a moment to observe the fabric and the lines and soft angles that are created by its drapery. Using some A3 cartridge, newsprint, sugar paper or a sketchbook and your charcoal, begin to loosely mark out some of the folds you see. Work quite quickly without thinking too much and trying to keep your eyes off the paper as much as possible.

Take notice of where the shadows fall and use charcoal to work the shadow in, smudging it with your finger to create soft shading.

Enjoy being able to layer drawings over one another or draw a series of small studies – draw how you feel works for you. This is not about creating a perfect ‘study’.

If you have time, add some colour. The wealthy elite in Ancient Greece would have had plenty of gold jewelry and rich colours in their clothes.

Starter Discussion:
The play begins with the Duke of Athens, Theseus, planning his wedding to Hippolyta, Queen of the Amazons.
Egeus, a courtier and Hermia’s father is a very strict and stern man and wants his daughter, Hermia, to marry Demetrius.
Hermia is in love with Lysander however, and the two decide to elope to a nearby forest. In doing so, Hermia goes against her father’s authority.

Context:
The Elizabethans believed that order was important. Respect for the law and authority was highly valued and they believed that the balance of the world was upset when order is disregarded, resulting in terrible consequences.
Egeus’s attitude towards Hermia might seem a bit outdated to us today, but it would not have been so for an Elizabethan audience who would have understood that a wiser and older man would know better than anyone else, particularly his daughter.

Shakespeare explores the themes of discord and harmony – or chaos and order in A Midsummer Night’s Dream. The Athenian court, with its rigid systems and principles, represents this order and the forest containing the fairies (which we encounter later) represents chaos.
How do some of the words spoken by Theseus and Egeus tells us about them as characters?

Egeus, upon complaining to Theseus that his daughter Hermia has fallen in love with Lysander despite him commanding her to marry Demetrius:

‘I beg the Ancient privilege of Athens.
As she I mine, I may dispose of her –
Which shall be either to this gentleman
Or to her death – according to our law
Immediately provided in that case’

Theseus, when advising Hermia not to go against her father’s wishes in her marrying Demetrius:

‘Be advised, fair maid:
To you your father should be as a god,
One that composed your beauties, yea, and one
To whom you are but as a form in wax,
By him imprinted and within his power
To leave the figure or disfigure it’.

You’re going to assign a ‘model’ or partner up and take it in turns to dress up like the characters from the Athenian Court. You are mature, have authority and are wealthy – can you show this through your posture?

In Ancient Greece, clothes were worn loose and draped and often tied with rope or pinned with brooches. You may have already studied the Ancient Greeks in your topic work – can you remember seeing images of clothes from that era?

Quick context note: Shakespeare wouldn’t in fact have visited Greece himself, but he would have had a good knowledge of the myths and legends from Ancient Greece and this inspired some of the events and characters in A Midsummer Night’s Dream.

Take some of the fabric you used in the warm up. It doesn’t matter if it isn’t enough to create a whole ‘outfit’ but try and drape it over your shoulders. Now it’s time to channel your inner Theseus, Egeus or Hippolyta!

Given what you know about these characters, how might they stand? Would they hold their head up high or look down on others, where do their hands rest?

Try not to get caught up with details as soon as your pencil hits the paper. Begin by looking, then gently marking out the basic form of the figure. Move around fluidly and try and use the full height of the paper.

Thinking about how you used fabric in the warm up, can you look closely at the fabric on the model and how it falls over the shoulders or arms? As you channel your inner Athenian think how might they be holding their heads, where their arms fall, and where they are looking.

Think back to when you were warming up with the charcoal and using dry brushes to blend into the paper.

Use different marks and strokes with the charcoal to convey texture in the fabric.

If you’ve partnered up and taken it in turns to model, swap round when you have drawn for about 15 minutes and have the main information down on the paper. If you have one class model, swap them round for someone else so everyone has a chance at drawing. Try and drape the clothes in the same way as on the previous model.

Keep working on your drawings and begin to add some finer detail. You may even want to begin to use your imagination and create some patterns on the clothes, or design them a brooch or sandals.

Reflection:
Pin your drawings up on the wall or hold them up.
What can we learn about the characters through how they are standing and what they are wearing?
Can you recap the key character traits of Theseus, Hippolyta and Egeus?
What did you find most challenging about drawing from life? Did you prefer being the portrait artist or posing as the characters? Why?