The story began with an invitation to me from a local children’s physiotherapy charity: could we paint an image on the outside of their building to make it more inviting when children arrive for treatment.

Working collaboratively within the community and in response to a genuine brief was an exciting challenge; one that I was keen to involve all pupils from Year 3 to Year 9. I visited the Centre to meet the team, see the building and discuss the brief. The brief only had two stipulations – the design should incorporate their kite logo and embrace the ‘flying high’ motto as well as be all inclusive and welcoming to the families.

A large whiteboard was used to brainstorm contributions from all classes, and we decided on a sky scene theme filled with flying children. The children began by drawing on rolls of lining paper stretched across the desks. The most spontaneity and confidence came from the youngest junior classes when drawing from their imagination. We moved them around, overlapping and fitting together to tell the story. Carbon paper was used to transfer the final image to a pre-painted board resulting in a 1.3metre design of a sky scene.  They focused on ‘Movement’:  dogs were lifted by balloons, kites carried teddies, prams with dolls floated past shooting stars and mermaids floated on clouds. The design was painted, presented and they were thrilled to use it as a welcoming feature for their foyer. 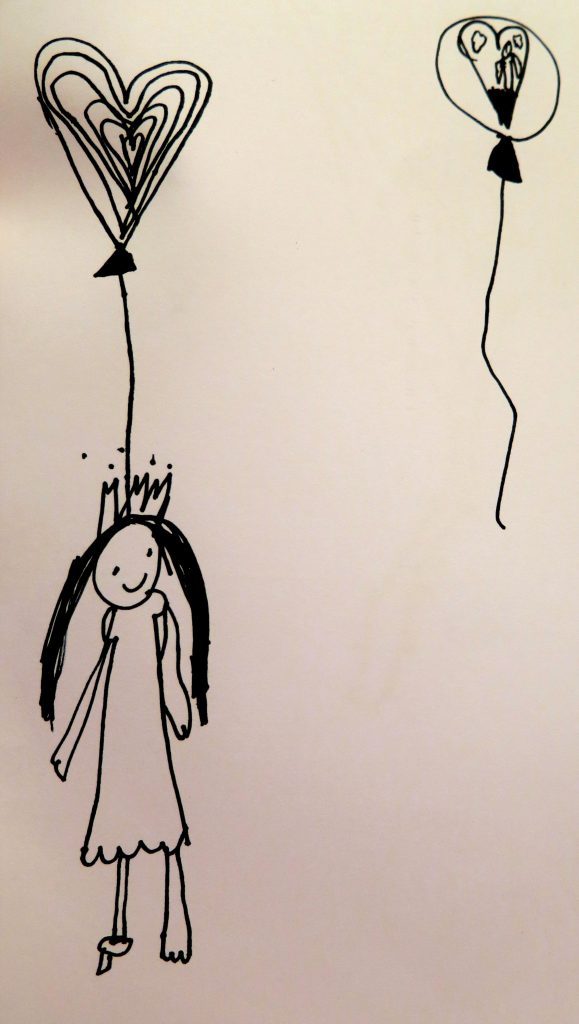 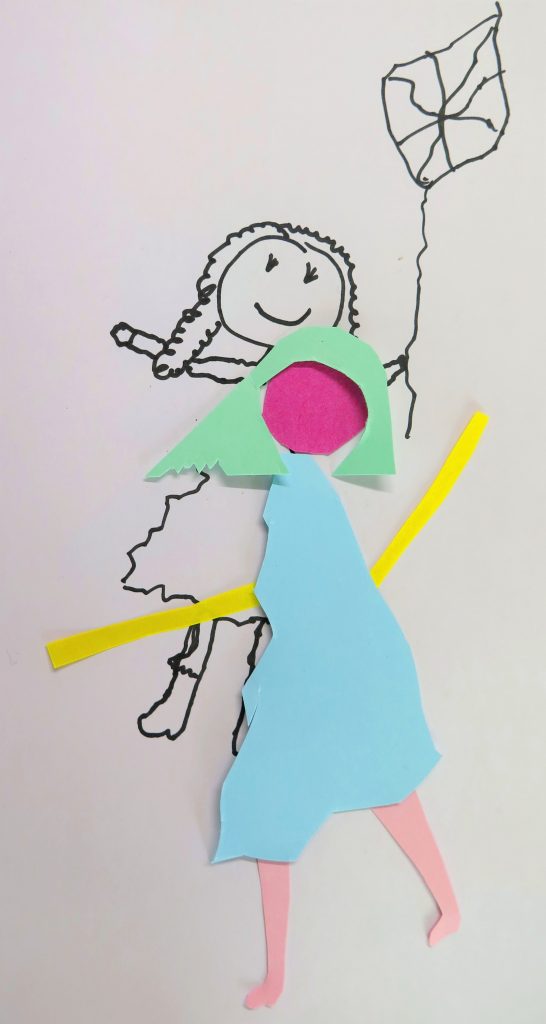 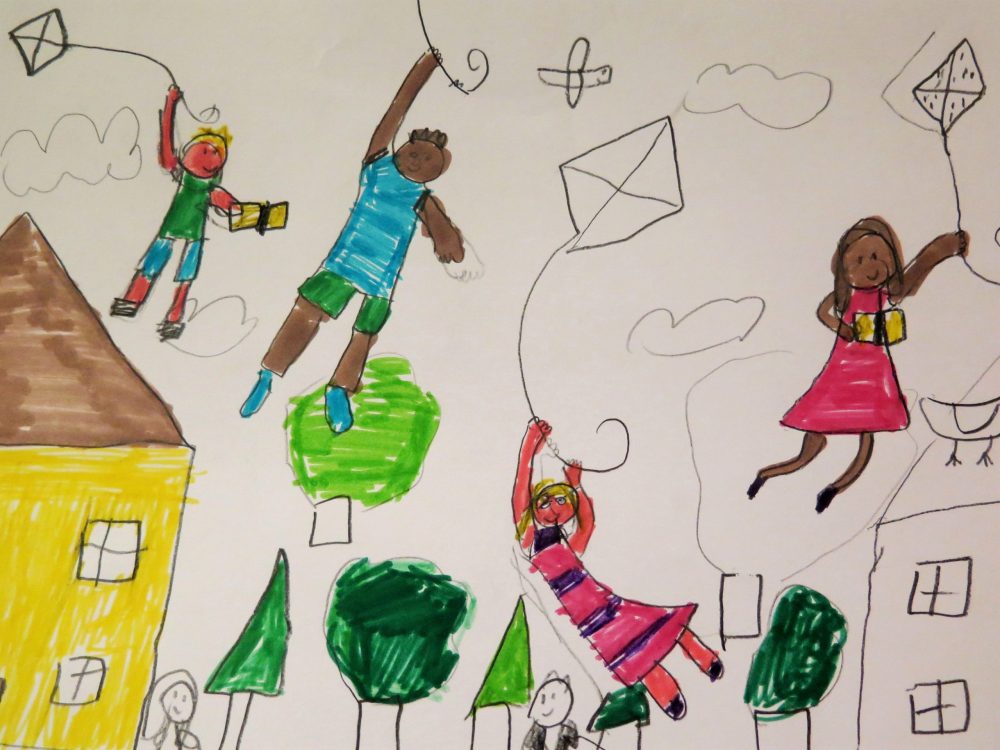 The seniors were tasked with the bigger challenge – designing and painting the outside of the building. They decided upon a big, bold design, accounting for any visually impaired children using the centre. Inspired by a visit to a local exhibition of Matisse’s paper cut-outs of plants and figures, pupils used marker pens to draw outlines of moving bodies using one continuous line. They drew from observation of each other with some using computer drawing software to create their simple shaped figures. Inspired by photographs of an aging Matisse when he was almost blind and making his cut-outs from his wheelchair, we too mixed vibrant colours and painted papers. He famously described the technique of directly cutting figures with scissors as ‘drawing with scissors’. Twisted and contorted figure shapes interacted with sitting and acrobatic poses. All the elements that usually worry pupils about figure drawing were disregarded – proportion, symmetry, capturing a likeness, measuring and the dreaded ‘fingers’. 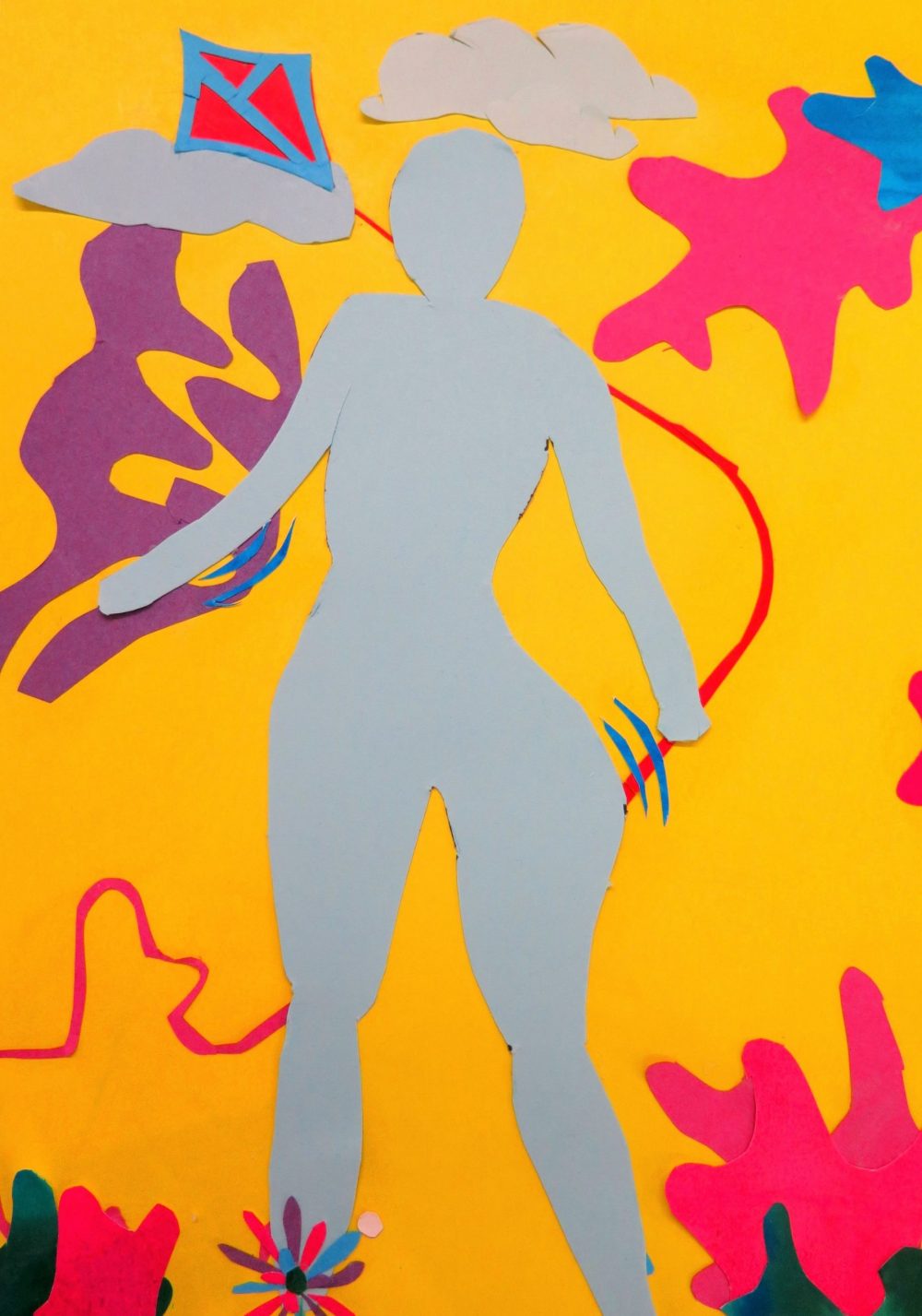 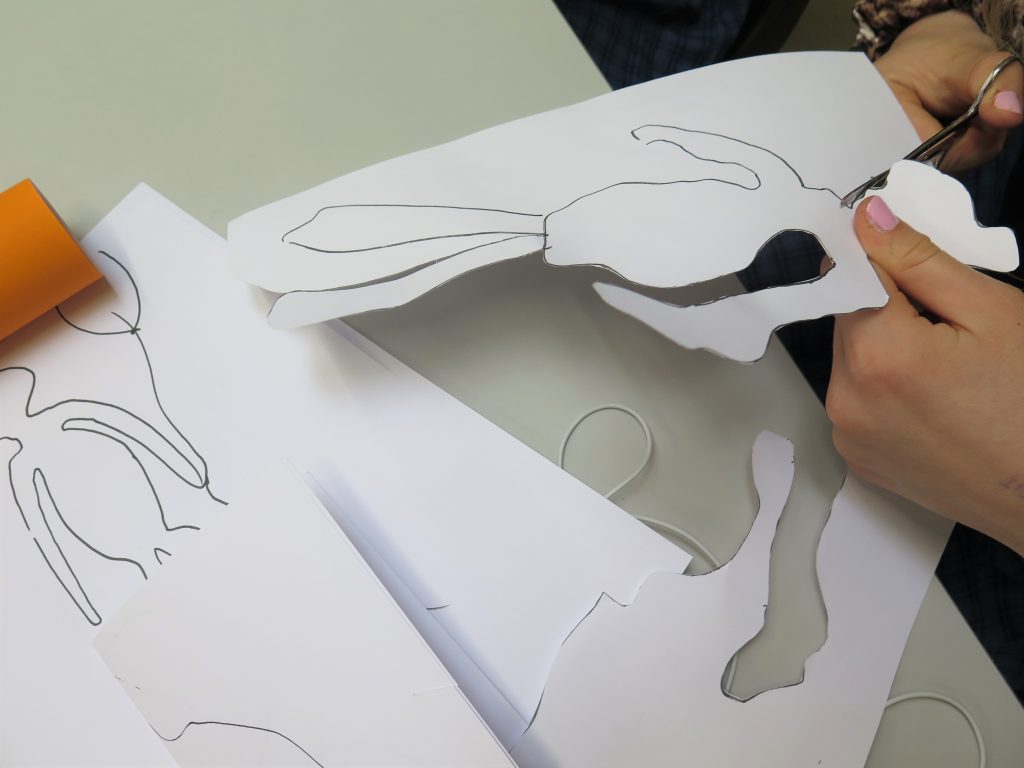 Inspired by Matisse’s designs – plants, leaves and birds were simplified and added to the compositions. Large figures were over shadowed by even larger plants – all shaped by imagination and the handling of the scissors.

A final mural design, using the collage shapes, was planned around the position of the windows across the exterior wall. The logo kites were added to each figure.

The feedback was positive and so the next stop was to the local paint shop to match the masonry paint to our design palette. Bamboo sticks with pastels taped to the end allowed us to scale up the image without losing the quality of the image. The design had to be masked off with tape for ease when the children painted. Groups of five children at a time came for a couple of hours to help and in typical British weather, we taped in torrential rain and painted in the blazing sun.

We had continual encouragement from any passers-by.  It developed quickly each time we stood back to view the advancement, we planned the next stage. 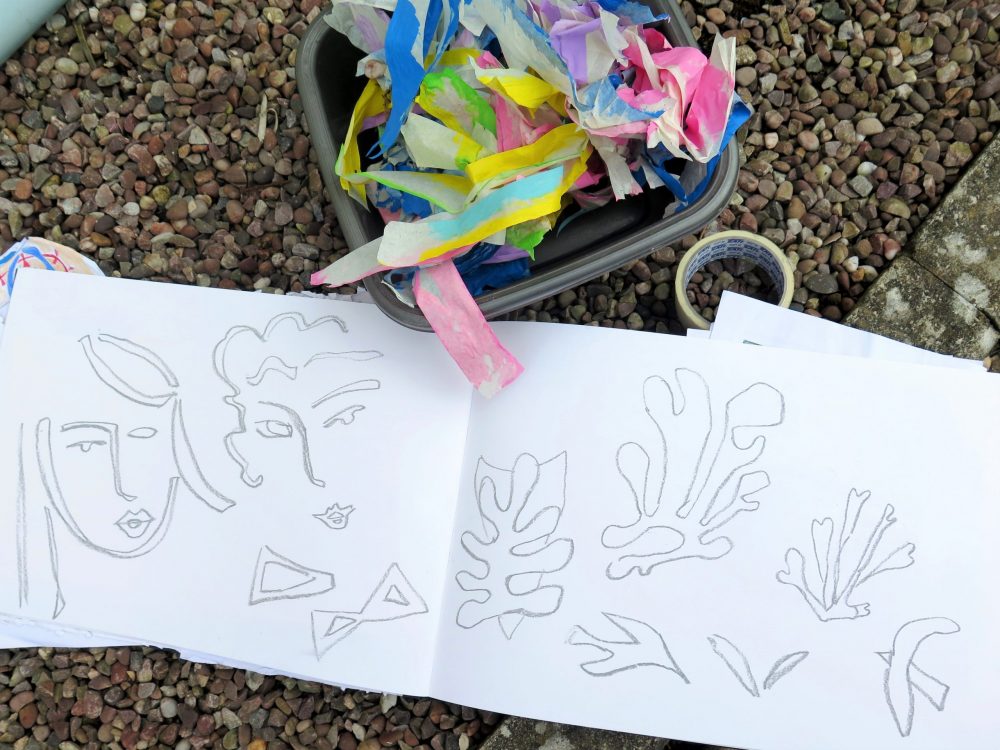 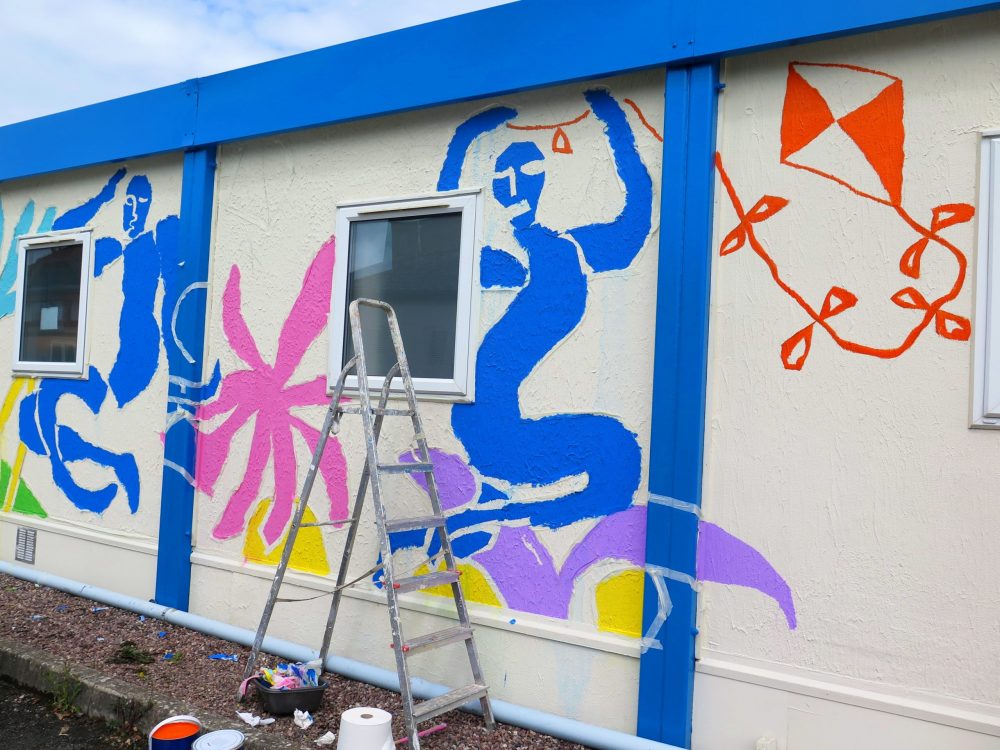 The triumph of the final mural was born from the strong lines, simple shapes, vivid colours and size of the figures. We were not sure what the hospital were expecting when they initially asked us, but everyone who sees it stops and smiles and this was our vision.

The benefits are evident from the hospital but, likewise, the pupils have all profited from engaging in the various stages of the process. Hopefully they have gained empathy for the children using the centre, understanding of a local charity as well as a sense of community. One pupil said ‘when standing painting, I realised that we all have different skills that can benefit each other and that’s how a community should work with schools and hospitals as central features – only the teacher could have the vision to pull it off, the children were able to create the unique design, the nurses are able to offer the specialist treatment, the helicopter pilot hovering above has specific skills and the surgeons operating in the theatres next door have the life-saving expertise.’

We are just a little bit proud too, that our little drawings can have such a big audience and have an impact for many years to come. 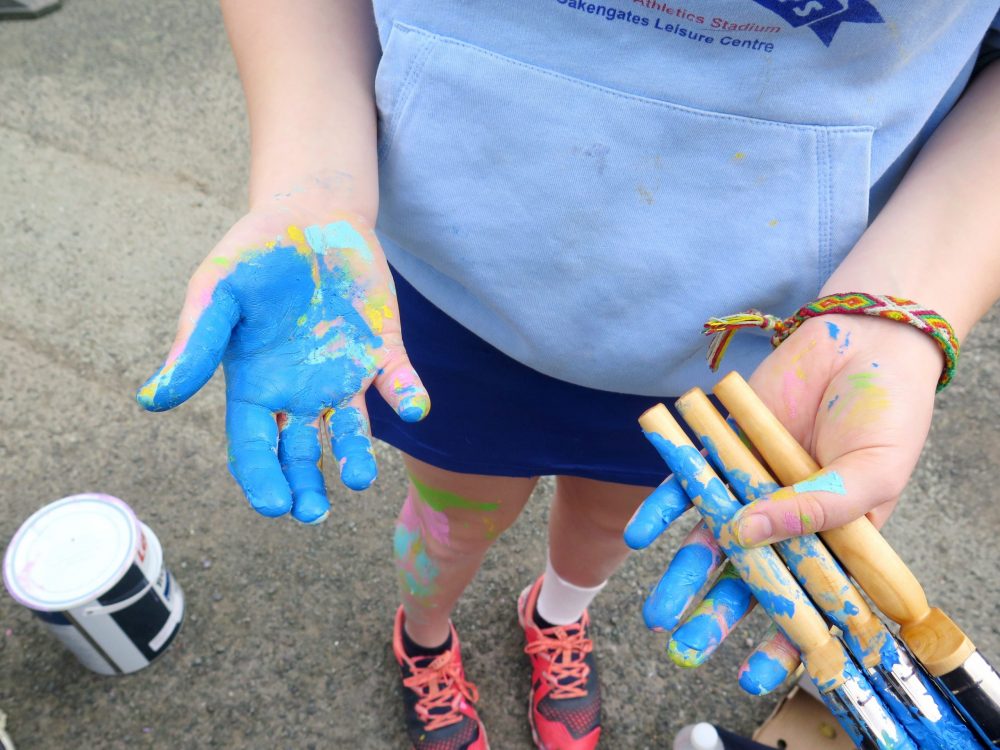 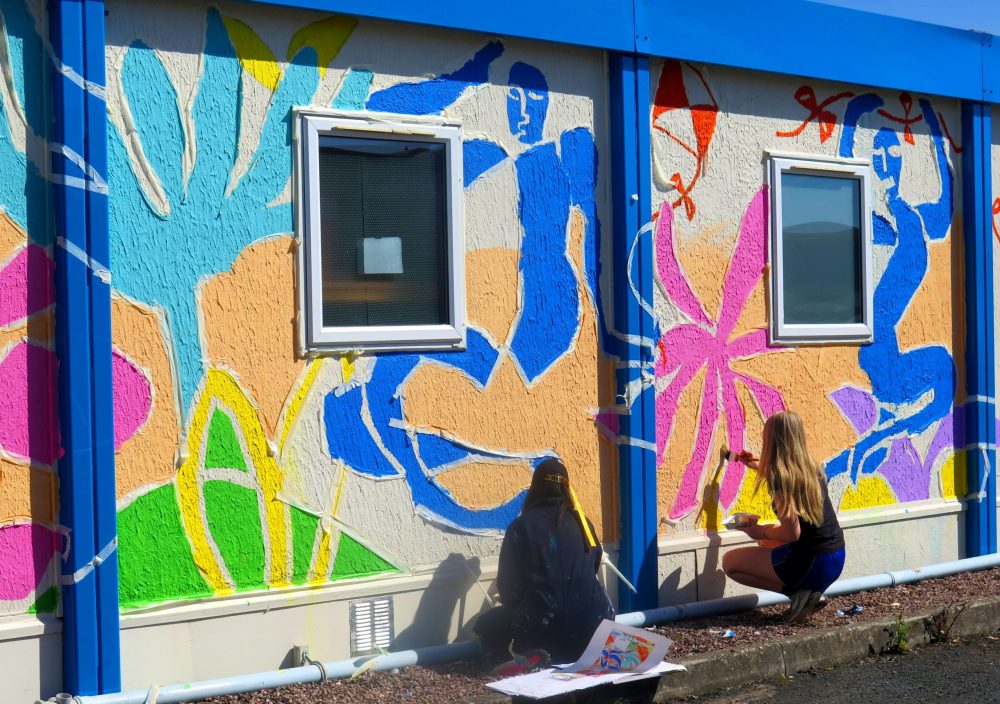 Rainbows and Waves for Grey Days