In this post Mandy Barrett shows us how she inspired the children at Gomersal Primary School to create a powerful installation commemorating the 75th Anniversary of D Day. Encourage your children to get creative whilst helping them understand the significance of this anniversary in the post below. This activity can be adapted for all primary ages. 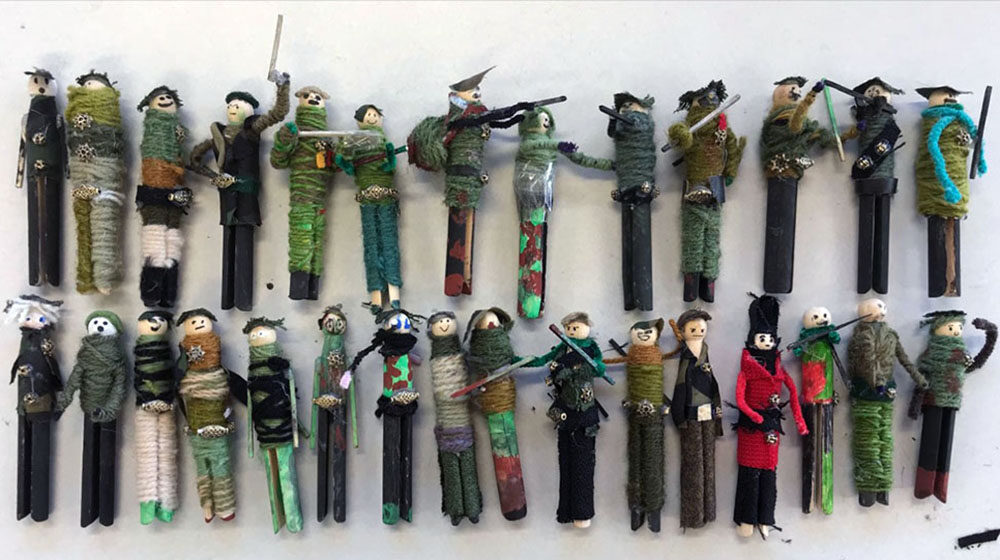 Remembrance Day or Armistice Day comes around each year, in the United Kingdom, on the 11th November. It is at this time that we take part in numerous activities, to teach our children the importance of remembering the sacrifices of those who served for our country during the wars.

To mark the 75th anniversary of the D Day landings, we wanted to create a memorable art installation. Something that would be meaningful, make an impact on our children and help them to understand the significance of this anniversary. In the past we have created displays of poppies but wanted this year’s to be different. Our children find it difficult to visualise large numbers, in fact many adults do too. I will never forget the impact of seeing the ceramic poppies displayed in London. A stark visual, to aid the comprehension of what the numbers actually represent. I wanted our school display to do the same.

We decided to create our own visual army with every child and adult in school. Each person was given a wooden dolly peg and asked to design their own soldier to be part of a battalion. What would 420 peg soldiers all look like displayed together? How would this portray a sense of community and camaraderie?

The children learnt about different battalions and looked at a range of uniforms from various army regiments, both past and present. We also looked at the range of materials and fabric available to us from the school cupboards. The children used their sketchbooks to consider how they would turn their wooden peg into a soldier. What would they need? How would we fix the materials to the peg? Time was allocated for the children to explore and design. We talked about camouflage and why the Queen’s guard wore red (because that certainly doesn’t help them to blend in with their environment).

The battalion slowly began to grow as each year group tackled this project in a slightly different way. Some of our youngest children, painted their pegs with black trousers and a green top. Some children chose to use different colours. Some added matchsticks or pipe cleaners for arms and carefully considered the expressions on their peg doll’s face. Some soldiers had helmets while others were given hair. What became increasingly evident was these little peg dolls were all unique and each had their own personality. One Year 6 child even had the idea to turn their peg into a War Horse.

Our older children spent time adding finer details to their soldier. Wool was carefully wrapped around the peg to create the uniform and fixed into place with either PVA glue or a glue gun. Some created medals and backpacks and a small group of children wanted to add guns and grenades. The children were very much encouraged to be creative, resulting in some incredibly detailed soldiers. The children named their soldiers and began telling stories of their lives. Where were they travelling to? Who were the family members they had left behind? The links to Literacy were innumerable.

Finally, we displayed the battalion of soldiers all together in our school reception area. A lump of plasticine was used on the base of the peg to help the soldiers stand to attention. This is what 420 peg soldiers look like and we were able to use this as a teaching point when discussing figures and numbers relating to the war. Throughout the project we constantly remembered, thought and reflected on events from the past.

“It’s great to see a different approach to thinking about remembrance day. These peg soldiers are a refreshing alternative to artwork inspired by poppies. The processes involved encourage children to focus on fine motor skills: wrapping embroidery thread around the peg and creating small detailed clothes and helmets. These dolls look particularly effective when standing as a collection and would make a poignant alternative to a standard display board” – Rachel, AccessArt

An Exploration of Paul Nash